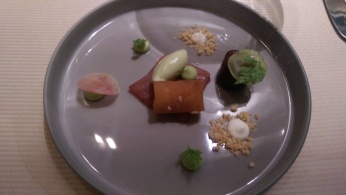 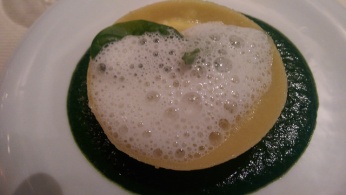 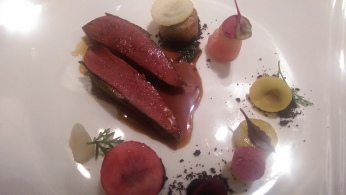 Budapest would not necessarily be one’s first place to seek a fine dining experience. When Hungarian food is mentioned one thinks of goulash, salami, paprika and foie gras.  Naturally,  Hungarian food can be extremely tasty as cook would testify. She is half Hungarian herself and knows how to create a perfect Paprika chicken. The inscrutable one and Masterton were in tow and had found a restaurant called Costes which sounded interesting. Masterton called for a reservation only to be told that they were busy until 9pm. Harrumph! Then lo, he was informed that 8pm might be possible but he should ring back on the day. He duly did and fortunately we were told that 8pm would be possible. We arrived at the appointed time to find the restaurant quite empty. It remained only half full until we left. Quite extraordinary. What a carry on. Obviously they were trying to create the impression that they were impossible to get into. Fortescue was enraged at the end of the meal and gave them a dressing down on the subject. However, this paled into insignificance as we had just finished an exemplary and perfectly delivered meal for which we would gladly return. One does not wish to harp on about how good this restaurant was. The Portuguese chef trained at the famous El Bulli in Spain, one of the greatest in the world and this was demonstrated with aplomb.

The meal started with a real surprise with some excellent amuse bouches which were savoury marshmallows and macarons. All presented exquisitely on a wooden platter.  Then a further treat, butter “five ways” to accompany one’s bread. 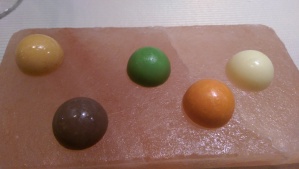 T’was a veritable surprise to find butter flavoured with olives, duck fat, basil and garlic etc.  Each flavour was divine and set one on a roller coaster course for a most memorable dining experience. One’s options can be seen on the menu.

The Inscrutable one was ecstatic and in heaven at one time. A rare occasion indeed. One’s Tokaji Aszu infused duck liver was incredibly tasty with the rhubarb jelly forming a perfect accompaniment

The ravioli was of perfect consistency and the spinach was pureed and an excellent accompaniment. One can see it in the daguerreotype above.

One’s taste buds exploded with the flavour of the pigeon which was perfectly pink and most tender. The coffee-flavoured powder that accompanied it and the beetroot were excellent and the portions were just right for the five courses we had opted to have for €85. We could have opted for seven courses.

The presentation of the Strawberry dessert was stunning and something to behold and Masterton tucked in heartily. It is pictured above. The textures and colours were so vivid and attractive. Personally, one chose the cheese course which surprisingly contained mainly French cheeses with no Hungarian cheese. This was a slight disappointment but the cheeses were tasty including a bleu d’Auvergne and a camembert.

The staff were extremely friendly and the whole team was introduced to us. They smiled, they were happy and they served with excellence.

On departing, all agreed that we had partaken of one of those rare experiences, a near faultless meal. This storms into one’s Top 10 restaurants and if only it were to move to Londonium, one is sure it would be booked for a decade. If only that were the case in Budapest and their pesky pretence at being busy. Mes amis, jump on an aeroplane and eat here tout de suite.