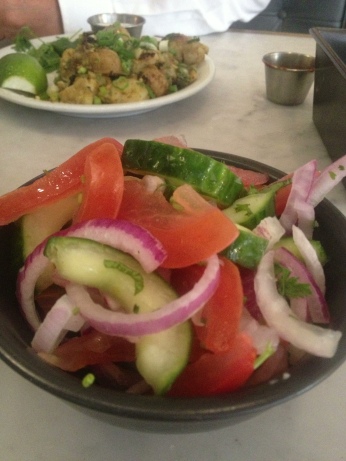 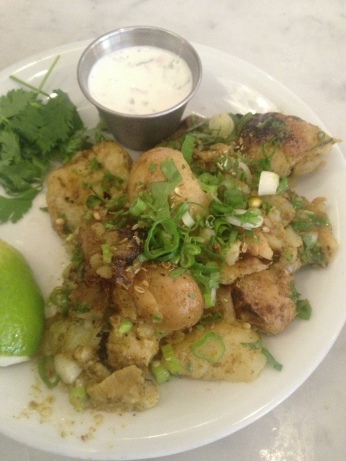 “Meet at 12.15 on Thursday at Dishoom” texted Pettigrow.  As a fellow gourmand and lunch companion extraordinaire, one knows that Pettigrow’s recommended rendezvous would prove a worthwhile sortie.

Thursday was a sweltering, yet beautiful English summer’s day. One wished to be reclining in a deckchair in the countryside enjoying a cream tea and hearing the occasional thump of willow on leather.

However, Dishoom was far removed from this idyll.  Situated in the middle of Covent Garden in London, it is a bustling and contemporary Indian eatery with the feel of a Bombay café. However, there is no flock wallpaper, there are no waiters in waistcoats and no Indian music. No air conditioning meant that all windows were open wide to the busy street outside which leant further to the atmosphere and made one feel even more that one had been transported to the streets of Bombay.

Behind Pettigrow, the bar tender worked ceaselessly mixing various alcoholic and non-alcoholic concoctions. The raspberry Bellini’s looked particularly enticing and demonstrated the type of clientele that were attracted here. One was ready for a thirst quenching drink but one was in for a shock. Pettigrow uttered the words that one had never expected to hear. “Try the Chai”.
What!!! Had one heard properly? what was this? Yet another of one’s chums on the bandwagon?  A non-alcoholic drink being recommended by Pettigrow. After one had gathered enough courage to agree our Chai (Tea) was duly served. It came piping hot in a tall glass and it was…..delicious. Warm spices, cardamom and cinnamon leapt out and dappled one’s tongue with delicate yet wondrous flavours. One will return just for this!

The serious business of ordering was handled by Pettigrow who knew the ropes. House Black Daal – simmered for over 24 hours was spicy and full-flavoured. Skate cheeks Koliwada – “Cheeks?” I hear you say… yes! and very cheeky too, covered with a spicy, crispy batter. Delicious, one fought off Pettigrow for them. Then, fresh (and it was fresh) salad of tomato, cucumber and onion. Lamb Samosas and finally gunpowder potatoes smothered in herbs and aromatic spice. Mouth watering. We slathered the black daal on freshly cooked roti bread which one could see them cooking on the upturned metal dome (“kawa”) in the kitchen and raced to each plate.

The eatery buzzed with a pseudo trendy, metropolitan lunchtime crowd of all ages and it was full. An Indian restaurant, full at lunch time? Unheard of. Surely one knows that Indian food is eaten after many tankards of ale at McSpigget’s or some other hostelry at 10pm in the evening. One knows why it was full. Reasonable priced dishes to share, each bursting with its own distinctive flavour and each in turn being delicious and to top it all a lively atmosphere.

This was casual but classy eating at its best. The staff were pleasant and efficient and on parting the manageress suggested that one should do breakfast. One will return and one will drag Fortescue along and most definitely the curry monster that is Masterton.  Or maybe one should try the Shoreditch branch? All in all Dishoom delivers….or rather it doesn’t as it doesn’t do takeaway.