For what we are about to receive 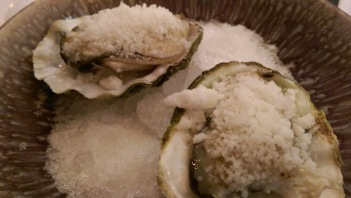 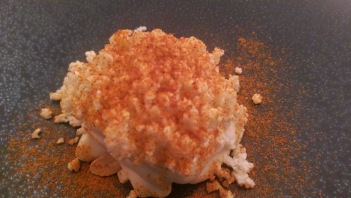 This was brill, the fish 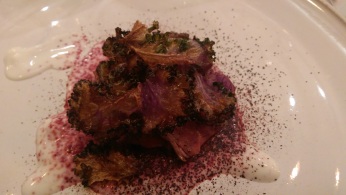 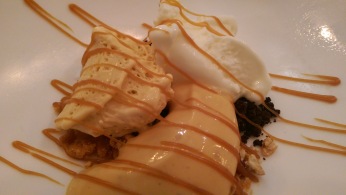 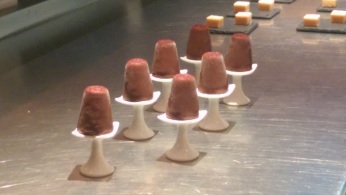 Yes dear readers, here are many images of one meal which featured 13 courses as displayed on the blackboard in the kitchen. In this case, the kitchen was in fact the restaurant and seated a mere 19 all of whom were accommodated in two sittings.  What a strange affair. We entered through a hot dog restaurant. Yes, a hot dog restaurant called Bubbledogs which served two hot dogs and a glass of champagne for £20. (not quite one’s cup of tea). Hidden behind is the Michelin starred Kitchen Table which consists of a long stainless steel kitchen top surrounding the kitchen. It’s slightly surreal as a dining experience and when we entered the chefs were busy prepping the dishes for the first wave of 10 diners who had started eating at 6pm (what a most uncivilised hour to eat, not English at all).

The menu was on a chalked blackboard with one word clues as to each course. One is a fan of this type of menu as it is such a surprise when the course actually arrives. The four of us, were seated side-by-side so it really didn’t work too well and is more suited to couples or beside us one single man with no friends, alone at the counter. Fortescue struck up a conversation with him and was not heard from by us the whole evening. Sir Cosmo had spotted the restaurant and one must say it was a real experience.

Despite the photo, it was one oyster each even though one would have liked two! The potato was very clever and had been through a real ordeal to arrive on our plates as a kind of long crispy tuile. One can say that some courses were superb, most were excellent and in your dear doctor’s case one was not too fond of the way in which the Ox tongue was served as the “crunch” of biting through the tongue which had been sliced straight through was most disconcerting. (Just called “beef” on the menu).
Rouelle was in fact cheese served with honey taken fresh from a honey comb in front of us.

All of us were impressed with the ice cream with salted caramel but who doesn’t love salted caramel? Naturally this course was simply called “caramel”. Damson was a damson sorbet and it looked resembled a lollipop on a stick.

The intriguing part of the whole experience was that nothing was in fact cooked in front of you. It was in fact assembled with the constituent parts. The “chefs” in the restaurant merely putting the final touches to their previous work. This was fun to watch but one had hoped to see some things flaming away and some sweaty sous chefs being shouted at.

Would one return? The short answer is “non” mes amis. Although it had novelty, it really is a one-off experience and one prefers a real restaurant experience if one is to spend £88 just on the food alone.