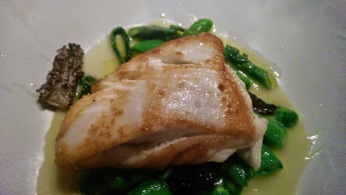 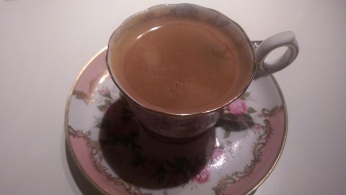 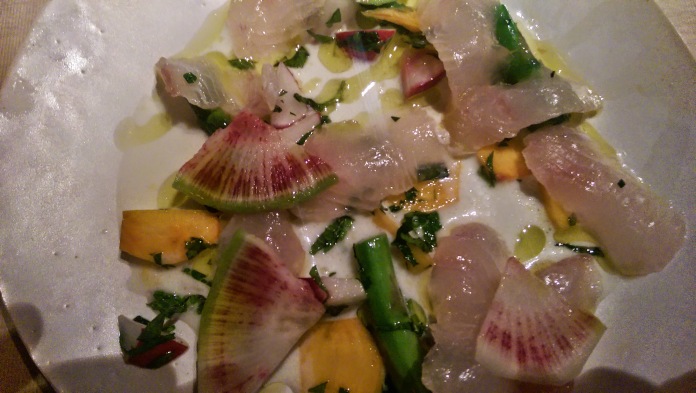 Two distinguished looking gentlemen tumbled into the trendy ABC Kitchen clutching their petite, faux-leopardskin umbrellas. No one took a blind bit of notice, this was New York after all. Drenched from head to toe by the ravages of a New York downpour and looking fairly forlorn t’was your dear Doctor and Fortescue.  We had just braved five blocks of torrential New York rain protected by the last two tiny, gaudy umbrellas remaining in the drugstore which were purchased in desperation.

We were greeted by our American chum Rich Diamond who was similarly sopping wet.  The cavernous restaurant was buzzing with a rumbustious, trendy New York crowd which made McSpigget’s look like a poor house from 1840. Cocktails were being consumed aplenty (de rigueur on a Friday evening in the Big Apple). Large, strong Martinis abounded unlike the insipid offerings of one’s homeland… alas. “Hurrah” say I. The States holds some wondrous delights and cocktails are top of one’s list.

Strangely, the restaurant is part of the furniture and home furnishings store next door. My dear friends, this is no down-market, shopping mall adjunct for despite the warehouse styling of the interior, the reclaimed wooden tables etc. this also boasts a Michelin-starred chef and the restaurant has “environmental integrity”.  As is the current fashion, the chef sources his ingredients locally and even the earthenware is fired locally. Admirable one might say but it does rather proliferate as a marketing ploy by modern, trendy chefs.  Of course they fear they will be marked down in the eyes of the great and the good if they don’t realise that cooking is also about politics these days!  These super chefs are the modern day rock stars and their opinions count….don’t they? Harrumph! Save the whale old chums…eat dolphin.

BUT!! but! but!! but!!! One must say that the dishes that befell us used novel ingredients in creative if not always successful way. We agreed that the chef obviously had a very shaky hand when it came to salt. Either that or there was a salt surplus of which he needed to dispose.

We started with “ramp and goat cheese toast”. “Ramp?” one hears you say. Indeed, Cook back in blighty would ask the same question and your Doctor needed enlightenment too. They are wild leeks that grow in certain parts of the USA in April/May time and have a garlicky flavour. They are very trendy fodder and apparently, in New York no decent restaurant would omit a ramp dish from their menu. The toast was lovely but…err…slightly over-salted.

Diamond also chose some “wood oven roasted ﬁddlehead ferns with spring garlic and lemons”. One must give credit to the ingenuity of the chap in the kitchen. For those still pondering, Fiddlehead ferns being the tops of wild ferns which are tender and succulent. They were delightfully tasty although err….slightly over-salted. The Inscrutable one would have chosen this as he is a great afficionado of fiddlehead ferns and raves about them when one is walking in the English countryside.

One must say that the descriptions on the menu left nothing to the imagination. One was not surprised that the “shaved raw ﬂuke, asparagus, radish, chilies and lemon-yogurt” was exactly that. What a mouthful! not just to say it. It was very tasty and the best dish of the evening (see daggurerotype). One finds that in many restaurants in the USA that there is a trend to place as many things on one’s plate as possible in the expectation that one will like some of it. One might find this annoying but in some cases it really does work as with a wonderful salad that one had in Café Marquesa in Key West which made it into one’s gastronomic top listing of 2013.

Next, roasted halibut, spring onion vinaigrette with asparagus, morels and pistachios. Diamond chose the same. Yes all the ingredients were there on the plate and the halibut was fresh and delicious and the accompanying sauce was slightly umm…salty. The chef is apparently off to set up his new venture and no doubt will be taking some salt with him.

The restaurant is very popular, very loud and led to us all shouting to be heard. It is one thing to have a loud, buzzy restaurant but quite another to have the music also trying to compete with our conversation. The meal was coming to an end.  The menu had been inventive and tasty. Overall we agreed it was not too shabby.  “There was a lot of green” said Rich Diamond in summing up the meal “…and errr salt!” One could only agree and finishing the meal with a trusty double espresso served in a quaint old cup one trundled off into the New York evening in search of the perfect cocktail.

Tags: Eating out in the UK, Restaurant reviews