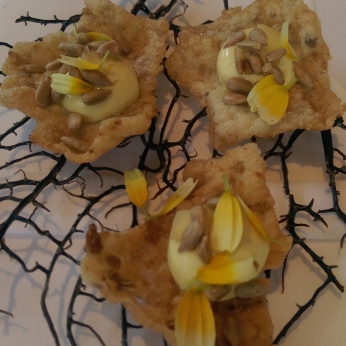 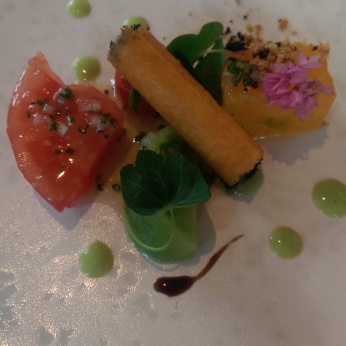 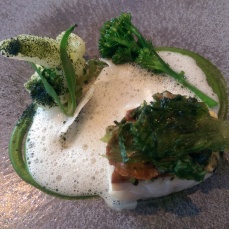 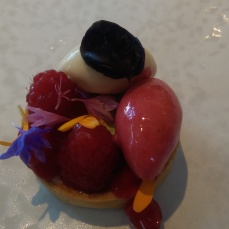 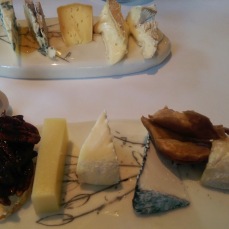 You may have thought your Doctor had plummeted to a Sherlock Holmes type death from the Reichenbach Falls. Fortunately, this is not the case and one is overjoyed to be able to regale you of a new entry to one’s top ten. Yes, not a slip of the digits on the keyboard, that is a 9.9999 out of 10. We had arrived at The Ledbury on a glorious sunny day. Fortescue, Remington, AstonBachelor and  Myserscough were in tow.

The elegant white, beige and cream dining room (no sawdust whatsoever on the floor unlike McSpiggets!). We elected for the tasting menu (8 plus courses!) with accompanying wines and took a deep breath as our credit cards began to melt. Oh yes, the tasting menu is £110 per head and £180 if you have the matched wine. We had arrived at noon on the dot as we intended to maximise our time for lunch. At that price who wouldn’t?

Beautifully presented amuse bouche arrived (de rigueur!) …The Miro-esque presentation was delightful and this continued throughout the meal. The knowledgeable sommelier announced each wine and presented some delightful and unusual choices including a Grüner Veltliner which one had not had for many a year.

One was not quite prepared for the feast that was to come. The flavours were scintillating . Each delicate addition to the plate was there for a reason and although portions were small they seemed to be just right. There were foams, cigars and pickled vegetables all presented as works of art and it was all ausgezeichnet as my dear chum Fotheringay might say. Time passed quickly. We oohed, we aahed…we nodded in agreement at the superlative flavours as each course arrivedwas savoured and our empty plates were dispatched. Then the waiter appeared.  “Cheese course anyone?” he enquired. We all looked at eachother…ANOTHER course?. We had already had six courses.

“but of course!” roared Fortescue in his inimitable rendition of Colonel Blimp “and bring some port too!”. There was a silent but collective “hurrah” around the table.
Pre-dessert then a small but tasty raspberry and ice cream tartlet….coffee, brandy (of course) then the bill which was inversely proportional to the size of each dish…a new record for your Doctor’s bank account. It was now 4.30pm. If we had been fat, ginger tom cats we would have been lying on our backs clutching our tummies and licking our lips.

Mes amis, my apologies…this is too expensive. I think it must remain privée for Doctor Lunch and his chums. Was it worth it?…oh yes..every last penny and not a harrumph in sight…