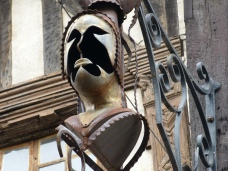 Now, where were we? Ah yes…Bordeaux. From here one pointed the sharabang north to the highly attractive seaport of La Rochelle in the Bay of Biscay. Arriving in glorious sunshine we sought out Le Bar Andre, a fishy eatery that has been here since 1947. A man outside was busily opening oysters like they were going out of fashion. The restaurant is bedecked with jaunty fishing nets and paraphernalia at the back and is a modern brasserie at the front. It was busy which meant that service was leisurely. The manager seemingly attempting to serve all the tables at once single-handed. Fruits de mer was excellent and one attacked the various crustacean with one’s weapons. Fortescue was not one for such delicacies and chose crab salad. Washing it down with some reasonable house wine (comme il faut in France) and a short time later, one was happily sated. So one had no complaints. However Fortescue looked forward to his next slab of beef.

La Rochelle is full of interesting eateries including the odd Michelin star restaurant but by this time, our waistlines and our capacity for food was diminishing after two and a half weeks of eating and drinking the delights of La Belle France.That evening we found Le P’tit Amiral in the port which served a classic french menu and was very enjoyable. Escargots for the Doctor, then poulet (chicken mes amis!) with some marvellous French cheese to finish and all washed down with the house red. Marvellous! Worth a visit methinks if one is at a loss for a venue.

From there, to Chinon. A lovely medieval town with much historical interest as it was one of the favourite residences of King Henry II. Sadly it only produces so-so wine, in one’s humble opinion. (letters of complaint to one’s manager please). One’s restaurant of choice, Les annees 30 was fully booked which was disappointing. However La Part des Anges was an excellent alternative which one found thanks to Trip Advisor (alas) . We dined very well in this bijou and one means bijou restaurant with its hospitable hosts, Herve and Virginia. Highly recommended if one is in Chinon.

Rouen beckoned. We found ourselves in the oldest restaurant in France. La Couronnne has been around since 1345 and overlooks the square in which Joan of Arc was burned in 1341. By jove she did get around! One has to say that it is one of those institutions that is geared towards tourists but the ambiance is lively and the old interior is a delight to behold. Naturellement, the stairs are festooned with pictures of all the famous celebrities who have dined here. We chose the “Delice impressionnistes” menu from which one chose foie gras (very good), cote de boeuf (satisfactory) and cheese (not from the marvellous looking trolley which was being wheeled around and was only for those who were going completely a-la-carte). Some locals from the local hostelry, Delirium Tremens (one jests not!) had warned us against eating here but as tourists one had to go. It wasn’t as bad as one had expected for a tourist “trap” and cheaper than one might have thought.

On one’s second night in Rouen, we seated ourselves in D’eux memes which was surprisingly good. A modern interior, friendly staff and not what one expected at all, the food was excellent.  Enough said!

Finally, on to St. Omer and a stay at Ch. Tilques. One met up with one’s chums for a rollicking weekend of celebration for the birthday of Lord Norberry-Grumpus. In tow were Frobisher, Sir Cosmo, Guiffart, Guildersleeve and of course one’s erstwhile travelling companion, Fortescue. After having been with so many French speakers for the last three weeks it was strange to be with English chums again. However, the whole hotel was stuffed to the gills with English. How disappointing, we might as well have been in England. Even the French waiter wanted to speak English despite one’s impeccable French. Harrumph!!

The restaurant was good but not spectacular. Presentation of the food was excellent and dessert was memorable for Guiffart’s tuile which did not wish to be eaten as one can see below.

I know you’re going to eat me 😦

And sadly, to the final day. We dined in Calais at  Aquar’ aile. Not one’s first visit and not one’s last.  Glorious, panoramic views back to blighty are to be had across La Manche. A very friendly, helpful waiter served us. Three of our party chose lobster and three chose Fruits de Mers. We were not disappointed but also rather shocked when our food arrived. Our table was full, more tables were brought. The lobsters were enormous which brought a huge smile to Fortescue’s face and look of horror to that of Lord Grumpus. Our bill was of similar proportions to the lobster. However, the meal was marvellous and we all enjoyed the grande finale to the weekend. One would definitely return but order Fruits de mers between two and lobster between two! If one’s readers should visit Calais, this restaurant is a must! So far removed from the spit and sawdust of McSpiggets tavern to which one alas would have to return ‘ere long.

Mes amis, alas the voyage was at an end and France is now becoming a distant but warm and pleasant memory. However, the next leg of the epic voyage would begin in two days with a departure for the north of England and then on to Scotland! Life is too short to stay at home. A bientot!

Tags: Eating out in the UK