Home › Anecdotes › The lure of the kilt!

The lure of the kilt! 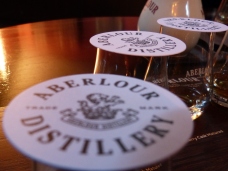 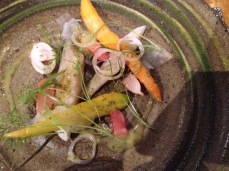 The siren call of the Lake District and  Scotland could not be ignored. Just two days back from the “Tour de France” and with one’s gastronomic tastebuds sated by the delights of French cuisine then we were off again! . So into the sharabang and off up the jolly M40 with one’s trusty companion, Fortescue. En route to the glorious residence of the Duke and Duchess of Devonshire, (Chatsworth House to the unitiated) one stopped for lunch, naturellement at The Devonshire Arms in Beeley a mere spit from the House itself. Well worth a visit and cooking certainly above snuff for a pub even if it does charge Londinium prices! Winner of Derbyshire’s Gastropub of the year for four years in a row. One had the largest ploughman’s lunch in the history of lunchdom which was excellent but possibly more than one might require.

Heading north with the sun shining brightly one journeyed to Cartmel in Cumbria. Home to the famous Michelin starred L’enclume run by Simon Rogan.  That evening we ate at the sister restaurant Rogan & Co. which is mere paces from L’enclume itself. One had excellent soused mackerel (see daguerreotype) followed by “Reg’s duck” (One hope’s Reg is not upset). The next day was the main event at L’enclume, One must leave this to its own entry to do it justice. Suffice to say that the four and a half hour, twenty one course dinner with no less than nine wines was supremely memorable, Mes amis, empty your bank account and shake out your loose change and visit this restaurant. Interestingly, one had crossed paths with the young and very capable maître d’ during his time as head sommelier at the Ritz. Small world..?

Then North to Scotland, a brief stay in Ayr (nuff said!) and the next day to Loch Voil (a 3 mile long, half a mile wide lake surrounded by 3,000 foot mountains in the Scottish Highlands). The secluded hotel that is Monachyle MHOR is secreted at the end of a five mile “driveway” in an idyllic situation overlooking the Loch. It hosts an award winning restaurant and diners venture all the way from Glasgow for dinner here. The barman mixed a mean negroni which as you know dear readers has long been a doctor’s favourite. He explained that he put Angosutura bitters in his mix. Not bad sir! Next time one might consider taking the seaplane for lunch which sounds a wizard wheeze.

Leaving the secluded haven of Loch Voil, one’s route landed us in Fort William. An unattractive town saved by the surrounding scenery of Loch Linnhe and the wonderful mountains which include Ben Nevis. Your intrepid Doctor and Fortescue had whizzed up the Nevis range in the cable car in the afternoon and breathed in the fresh air and marvelled at spectacular views.

No, dear readers, before you ask one did not visit Inverlochy Castle Hotel and Spa which would be an obvious choice for a gourmandish dinner in Fort William. Our respective stomach’s were groaning after many days of gluttony and more simple fare was in order. The hotel dining room looked decidedly dodgy as one noticed the zimmer-framed residents heading for the dining room like zombies from a 60’s b-movie. But then good heavens! One was in a three star hotel Dear readers. One entreats you not be shocked, one cannot travel “grande luxe” all the time you know! One was fortunate to find Crannog, a marvellous seafood restaurant on the pier overlooking Loch Linnhe. Booking seems to be essential as despite the town seeming to be empty the restaurant was full on a Tuesday evening and one had to eat late to get a table. One’s skate in black butter and capers was delicious with the exception of an exuberance of capers which almost hid the fish itself! A slip of a chef’s shaky hand?

Fort William is also home to a famous Jacobite steam train line on which Fortescue was most excited to travel. Made famous by Mr. Harry Potter due to the 21-arched Glenfinnan viaduct. (one has borrowed a daguerrotype from their web site). One was fortunate again to have glorious sunshine and clear skies which we were informed we were lucky to see such a thing in Scotland.

Then onwards ever onwards to The Craigallechie Hotel in Speyside which was delightful. A big rambling hotel with dark wood-panelled walls and wonderfully large rooms. The hotel restaurant served standard fare. One couldn’t complain at there were no pretensions to this being Michelin starred. One chose steak for one’s main course and it was fine. Smoked Salmon to start…safe! Capiche?

Yes! Speyside, the home of Whisky. The exciting prospect of a distillery visit…or two. A visit to Dufftown which is well named. It took but a few minutes to see that everything appeared closed. The whisky festival had ended two days earlier. One assumes everyone was nursing a hangover. Well done you!…ahem…  The visit to Glenfiddich (free!) was excellent with some fine whisky tasting at the end. One bought the 18 year old single malt in gratitude. Then to Aberlour where one was seduced by the prospect of bottling one’s own whisky. Doctor Lunch’s malt no less!! Hurrah again! It is now beckoning from the corner of one’s drawing room!

From there to Edinburgh. Cocktails at the stupendously elaborate and over the top Dome, followed by dinner in the Victorian interior of Café Royal . Tiled murals from Royal Doulton adorn the walls and celebrate the great scientists in history. The bar had a lively after work buzz and the restaurant served oysters, mussels, lobster and seafood. Classy!! It was also reasonably priced compared with many of our recent eateries. Hurrah! By the way dear readers, Edinburgh is a marvellous city with a rather major blight of a new tramway which seems to have devastated Princes Strreet. One hopes they will deliver it soon. Apparently there were meant to be many tram lines but it will now just get half of one line which goes to the airport. All at a cost of £776m or some say “more than a space rocket!”. Harrumph..will they never learn. Have you tried to sleep through Manchester’s screeching trams..awful. Rant over. One was upset. The rain had set in and it was time to head south again towards Londinium.

It had been raining heavily all day, the sky was gloomy grey and one arrived in Newcastle in a deluge. The “fog on the Tyne” was trounced by the rain. One braved the elements and elected for a Chinese meal at Hei Hei. Yes!! dear readers one does do Chinese. Alas Fortescue is not one for experimentation. So it was the set menu which we chose. One was disappointed as it meant that one had a very limited choice. The pain was exacerbated as one saw the wonderful seabass, bok choi and broccolli being served on other tables. One had to make do with sweetcorn and chicken soup, prawn toast and crispy duck. Standard Chinese fare and not something that one can get too excited about. However Fortescue was happy.

The next morning a trek was planned to the Angel of the North which we did. The rest of the journey was open. In the morning, Fortescue and I stared at each other over our respective breakfast plates, wondering whether this gourmandish excursion would end and we agreed that it was time. HOME…Enough! Almost seven weeks on the road and seven pounds around the waistline. It had been fabulous and one has not been able to fully expound on the wonderful meals and moreover the wonderful chateau, castles and other fine attractions that one had seen. However, enough was enough. One whizzed to the Angel of the North, snapped one’s daguerrotypes and joined the merry throng of cars on the M1 south for a non-stop dash to the delights of home and a fine cup of tea. 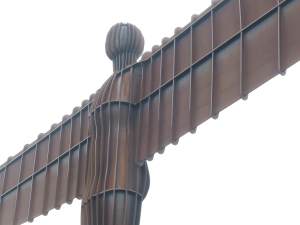 Tags: Eating out in the UK