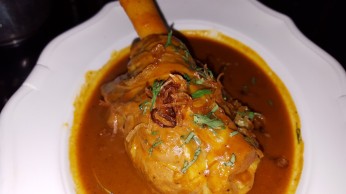 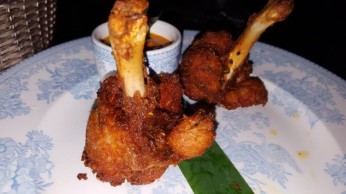 Just around the corner from the Ritz Hotel, a little surprise awaits in the form of an Indian restaurant which is Michelin star no less. Now, any self-respecting Englishman would normally visit an Indian restaurant after a couple of pints in the pub after the rugby. However, the world is changing and classy, high-end Indian restaurants abound. The list includes such notables as Veeraswamy near Piccadilly Circus (years old but still a classic), Amaya in Knightsbridge, Cinnamon Club near Westminster Abbey or The Painted Heron which is further afield in Chelsea. Roti Chai near Marble Arch offers a slightly different street food experience. See one’s review.

More recently Chutney Mary has opened in St. James Street having recently relocated from the Fulham Road in Chelsea after oodles of years. So methinks this niche still has space for a few new Indian eateries. One certainly could not really fault any of the aforementioned restaurants unless one is an aficionado of those eateries that abound in the famous Brick Lane area of East London.

Ahem, so… back to Gymkhana. A Michelin star…really?….. for an Indian restaurant?.. Why not! Fortescue and I dived in by chance as we had just exited an art show and needed shelter from the rain which was persisting down. Gymkhana is in an old converted pub and upstairs it retains an air of..how does one put it… “pubiness” about it.  They were fully booked but offered a space in the downstairs bar to which we agreed. We were to find out that this was  a good move as downstairs has a buzzy, speakeasy feel with old time 30’s (one thinks) music playing with a low ceiling and lots of activity. The waistcoated staff behind the very attractive brass-topped bar looked busy and were serving ….cocktails no less. Hurrah! it was Martini time.

We sat on a raised ledge overlooking the bar and the restaurant and although it sounds ghastly, it was a marvellous spot from which to watch the nefarious goings on. The maitre d’ came over for a chat to make sure we were happy. We had a long chat and he suggested what we might eat and recommended trying a rosemary infused gin in the martini to which one agreed. The verdict on the latter ….interesting but my martinis have now been tipped in favour of the classic Pollen Street Social mix…See the review. However, his food suggestions were spot on.

Chicken wings, may sound like KFC were deliciously crispy and succulent. Kid curry, which always sounds wrong but it’s better than an old goat. Main courses were wild boar vindaloo and lamb shank. The latter came swimming in a delicious spicy curry sauce. One cannot fault these dishes which were generous portions and together with mandatory naan bread and pilau rice, we were not desirous of dessert. The evening was splendid. The maitre d’ came over for another chat and after a discussion about the virtues of Indian wine, he brought us each a small glass of a good quality and very palatable red to try. The Indian wine industry could be something to watch.

So, with our appetites sated we wandered off into the damp streets of old Londinium ready for the next gastronomic adventure. Would one return?..Yes.. and one might also make sure that the space near the bar is free. Interestingly, one notes on their web site that the downstairs is “a modern day interpretation of a 17th century East India punch house”. No wonder it appeals, it must be that old fashioned, fusty side of your dear Doctor. One must also tell one’s American chums that they can now get a super Indian meal in the centre of Town and if you just want a cocktail, this is more fun than The Ritz!