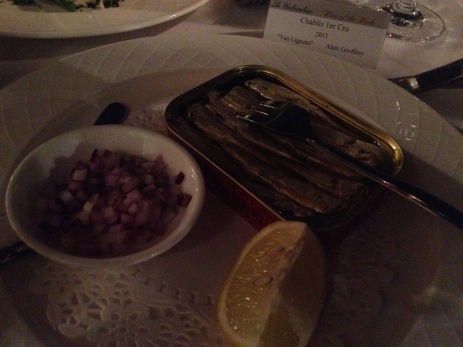 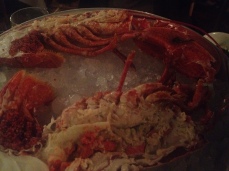 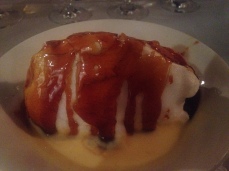 French restaurant openings seem to be in vogue. There is Brasserie Zedel, Chabrot (NOW CLOSED, Balthazar and then again there are the classic stalwarts that have been around for years producing wonderful food, ambiance and service. Naturellement mes amis,  Le Gavroche sits in one’s top ten. However Le Colombier is a restaurant secreted in a back street of Chelsea which has a deserved high class reputation. The inscrutable one had stated “I want French!” quite emphatically when we were pondering where our troupe should dine one Saturday evening. This was most unusual as usually his only cry is “Japanese!”.

We arrived early to an empty restaurant. An empty restaurant that would soon be brimming with a local Chelsea crowd who know  good thing when they see it. The complete antithesis to McSpiggets which one’s dear readers will recall is one’s chosen hostelry which cannot be recommended. Your dear doctor suffers it for the sake of conviviality. One can read a little more about McSpiggets and one’s other haunts and chums here.

But enough! Back to Le Colombier! We were seated “outside” in the front of the restaurant which has a conservatory feel and allows one to watch the passers by on the pavement. Fortunately, this is nicely heated and one does not need to wear one’s overcoat to eat. This is a wonderful place to eat in summer when it is opened up. When dining with The Inscrutable One, there is only one thing to drink..Chablis! No variation is allowed unless it is Champagne or sometimes he will acquiesce and opt for Nuits St. Georges.  A man of certain taste one might say and usually it is expensive!

We started with oysters and then Masterton opted for Sardines ” La Quiberonnaise ” which came as a great surprise when served in it’s tin! (See hazy daguerreotype above – apologies for the quality mes amis). Gadzooks! how confoundedly lazy can one be? A debate ensued and then we decided the sardines must be tasted. They were delicious! Without a doubt the most wonderful sardines ever. Fortescue, who’s not really a fish person declined. (If meat and standard fare is your choice then follow his selections from the menu above under chums choices.) The flavour trumped the quirky presentation and we unanimously approved of them. Why not? The Inscrutable One proclaimed his undying love for the sardines to the maitre d’ who offered to sell him some tins of which The Inscrutable One bought four.

Your Doctor chose steak tartare (a Doctor’s favourite) which was very good but still, yes Daquise once again springs to mind. In passing, one should inform one’s readers that after some research on the interweb, one has found a supplier for these sardines at a wonderful price.

Main courses consisted of Cold Lobster (a Fortescue favourite), filet de boeuf for Masterton of which he seemed to approve and cote de veau with garlic and and thyme for your Doctor which was excellent. Served with frites and green beans..what else!  The Inscrutable One naturally chose fish, Dover Sole (on the bone he insists!) which he ate heartily. That meant it was good!

The restaurant was now abuzz with lively chatter and the second bottle of Chablis had gone down well. One must add that this restaurant serves some excellent value wines starting at £18.50 which for a classy Chelsea establishment is very reasonable.

On to dessert. Your dear Doctor is always seduced by oeuf a la neige..which did not disappoint. T’was magnificent. Covered in a superb crunch caramel coating which melted in the mouth. When done well, this is one of the most sublime desserts one can eat. Must tell cook to find a recipe for this..! She’s been letting her standards slip recently. Fortescue plumped for Ice Cream..somewhat ordinaire as a choice one thinks. The others passed.

On departure, we all wondered why we do not come here more often. Did one mention the excellent service, efficient yet not overbearing and with no pressure to move from one course to the next to allow them to have two sittings which one abhors! We trotted off into the evening, Sardines in hand…superb.

So to sum up dear readers, this is absolument privee! Just for the Doctor and his chums. You are not allowed to visit this restaurant.

Tags: Eating out in the UK, Top 10 restaurants London