Ice in the urinals – classy! 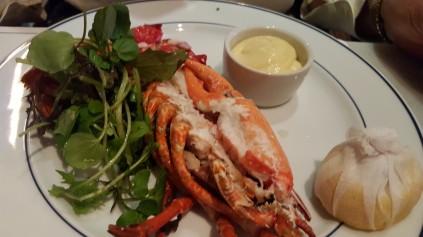 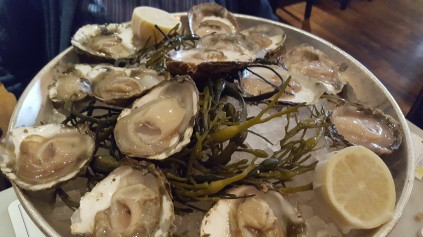 When you see ice in a urinal in the gents you know you are in a classy establishment. Sorry ladies but it is something that gentleman can have fun with!..ahem.

Bentley’s was one of those traditional olde worlde English fish establishments serving Oysters, Dover sole, lobster etc. It has had a remake in recent years and it’s a fine job they have done. There’s plush red leather seating and the bar is very attractive if one wishes to dine there. With that said, your dear Doctor visited about a year and half ago and had an appalling experience. The staff in the upstairs restaurant seemed bereft of any training or intelligence and the food was mediocre. It was an extremely disappointing visit exacerbated by the fact that I had chosen the restaurant for dinner for a group of American chums. They too were unimpressed and I foolishly had thought that I would be showing them a little piece of England. I vowed not to returm.

Nevertheless, Bentley’s has just celebrated 100 years and Fortescue’s older brother, yes, Fortescue senior (keep up!) had decided that this would be his venue of choice for lunch. So it was in trepidation that I approached the restaurant. Even the oversight of the renowned Michelin chef and restaurateur, Mr. Corrigan had not been an enticement.

In one’s youth one could drive up Swallow Street in which the restaurant resides. The restaurant has now got a very enticing open air section situated in the road which is fortunately now closed to traffic to avoid some messy dining experiences.

Fortescue Snr was waiting when we arrived. He was drinking a glass of wine. He explained that he had wanted a Chablis but when quoted well over £100 for a bottle he chose a Burgundy for £49. Yikes..not cheap by any means. However, the wine was deliciously crisp with perfect fruity acidity. Scrumptious in fact. A second bottle was de rigueur.

The senior fellow said he only eats oysters here so that was easy. Fortescue the younger loves cold lobster. Done! Your dear Doctor plumped for smoked haddock. Hurrah!  When the dishes came, we were all tucked in and the concensus was it was good scoff. One’s smoked haddock, which came with rice, was super. Our waitress was charming and did a lovely job of keeping our glasses topped up but not in a vulgar manner. By that I mean she did not pour a third of a bottle in each glass and then ask if we wanted another. It happens dear friends!

With one course under our belts we didn’t linger. Senior rushed off because apparently Bridget Jones had just had a baby and he wanted to see it. Not something that tempts your Doctor. Give me a good Dickens anytime!  All in all, methinks it was much better than last visit and is recommended if you want a good traditional English(ish) fish restaurant serving in central London. Did I tell you it’s just off Piccadilly? Don’t forget to bring a chilled credit card so that it doesn’t melt easily when you purchase some wine.